I have signed up for an encaustic workshop with my husband and I am so excited about it that I couldn't wait. It's being taught by Chicago artist Bridgette Guerzon Mills and you can check out her amazing blog Contemplating the Moon, here. So this is my second attempt at a mixed media encaustic.
I'm still experimenting with the whole process, figuring out how to fuse the layers just right and how to work with the transparency of the materials. I knew they would become translucent I just had no idea how much! 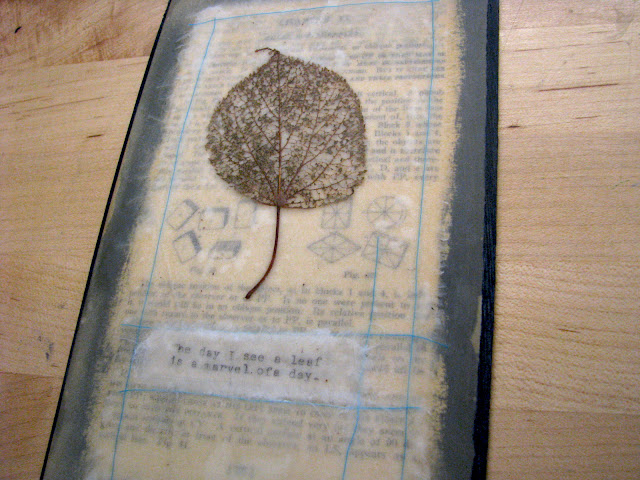 I began by painting a blackish border onto a piece of illustration board and then I fused a page torn from an old art book to it with wax. I have absolutely no idea what kind of wax I have. There were giant slabs of it in my classroom and I have an idea they are about as old as I am!
Then I layered on a piece of torn muslin fabric that I had typed on, but because it was so transparent you couldn't read it with the print from the book underneath it. I ended up putting some gesso over the area and typed on a smaller piece of muslin to place on top of the gesso. 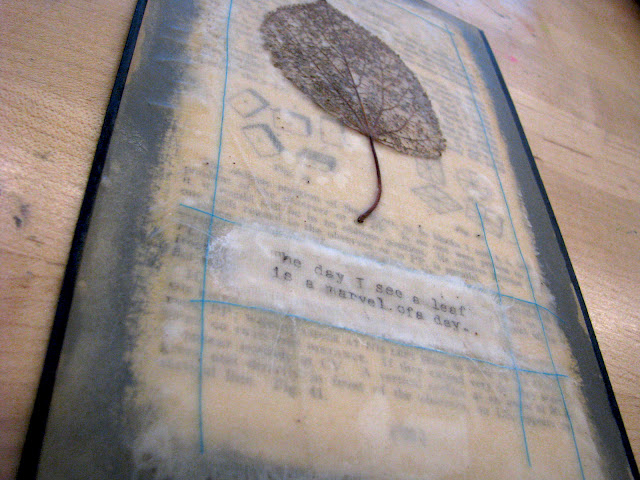 I have all sorts of pressed leaves so I chose this decayed leaf to imbed in the wax along with some blue thread. I really wanted to sew some red x's around the fabric before I layered it on but I had no red thread and I couldn't find a needle. So I was impatient and just improvised. But overall not too bad! I just can't wait to learn more at the workshop!
Posted by Laura at 3:17 PM 7 comments: 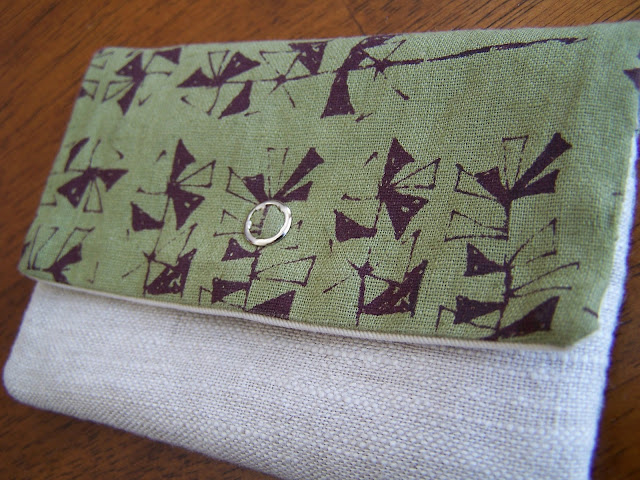 Back in December my husband took business trip to Toronto. I told him that he had ﻿to go to a store called Bookhou and get me one of the snap wallets. 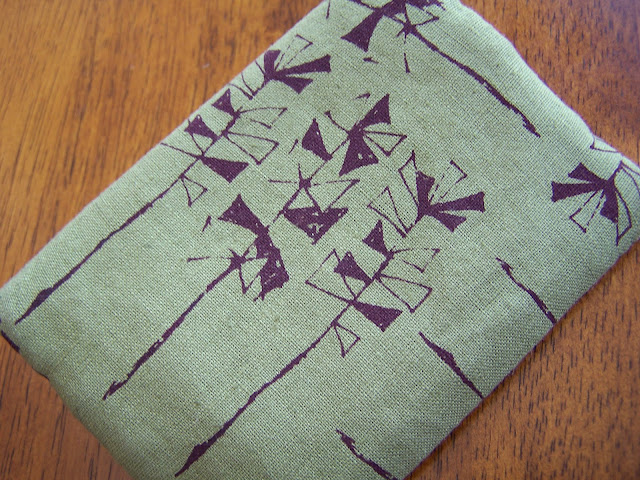 Arounna and her husband John make the most beautiful textiles and woodwork. They screen print all their own fabrics and she sews everything herself. 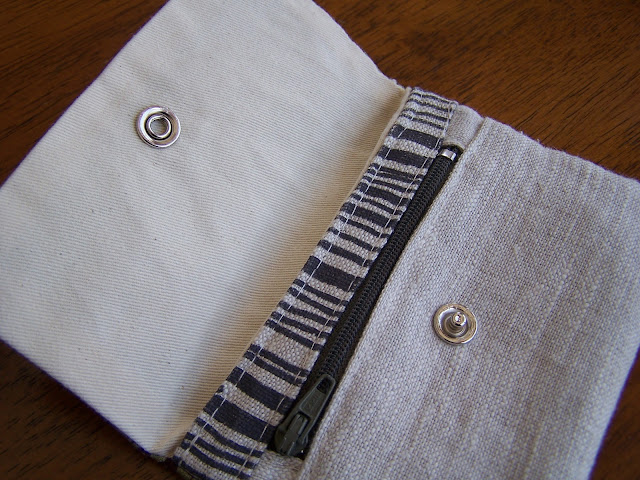 ﻿
I found Bookhou's blog (which you really must visit just to see pictures of their adorable daughter) and their Etsy store Bookhou at Home which has beautiful artwork for sale. 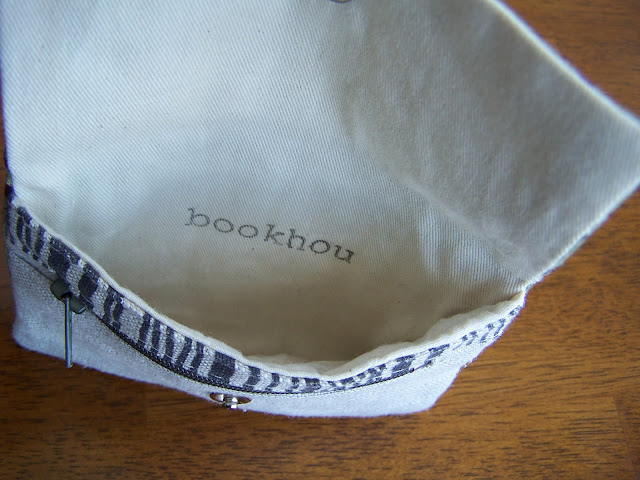 Anyways, the day my husband went to the store, it was closed, and since there were no wallets in the Etsy store I emailed Arounna to see if I there was anyway I could purchase one.  Well she was sooooo kind to send it to me free of charge because the store was closed!
I was so excited to get my wallet in the mail and I love it! It's the perfect size. I use it for everything from my money and credit cards to my phone and zune.
Thanks Arounna!
Posted by Laura at 7:41 PM 2 comments: 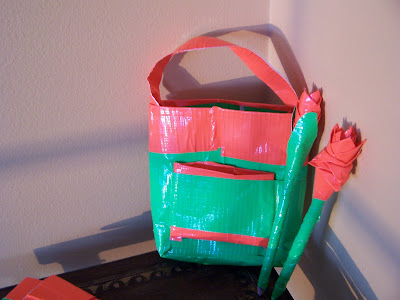 My daughter May and a couple of her friends from school have decided to start a business making things out of duct tape! 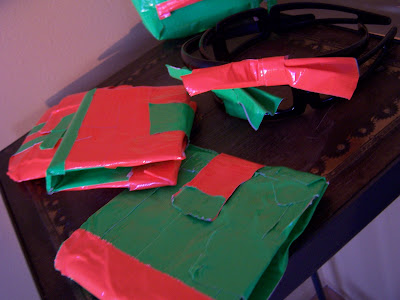 They even have business cards made up that list all of the items they can make and their prices listed on the back. The first photo is my favorite-the purse. She also made a phone case and bows on headbands. 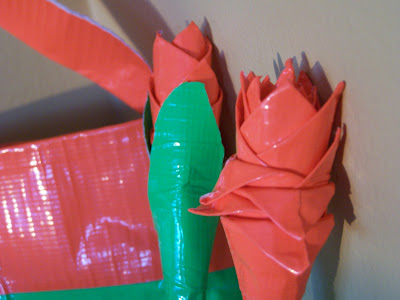 These are pencils wrapped to look like flowers. I love the fact that all of these are her own designs and she figured out how to make them all by herself. 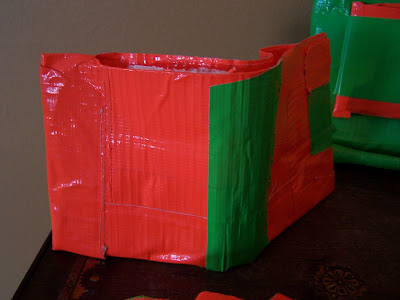 My other daughter Rose liked the idea too so she made this wallet. 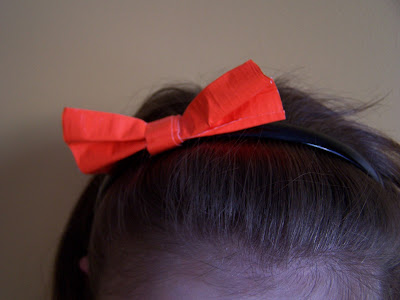 Maybe when May is in high school she should try for that scholarship where you have to make your prom dress and suit all from duct tape.﻿ I think I'll buy a different color tape for that though!
Posted by Laura at 7:41 PM 3 comments: 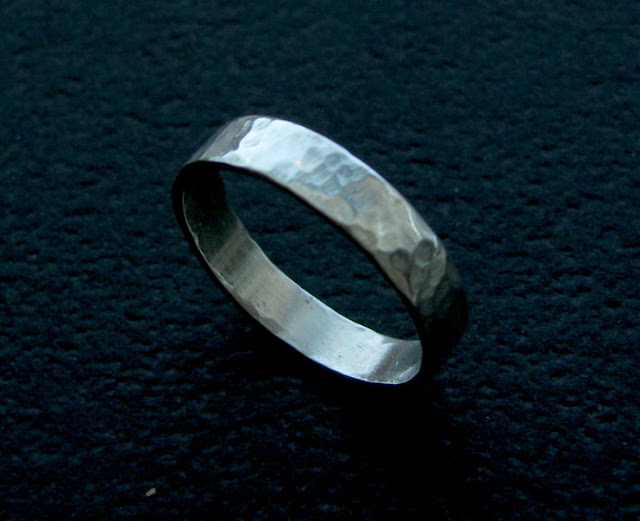 I haven't made any jewelry in a really long time. And in all of my years teaching jewelry and metals I've never made a ring. I was always going for the well planned design and rings just never seemed to fit into my creative realm.﻿ Don't get me wrong, I love rings! I guess I felt I would never be able to make one I liked because I really don't know how to cast well. But this ring is made from a piece of flat silver wire and is incredibly simple to make. 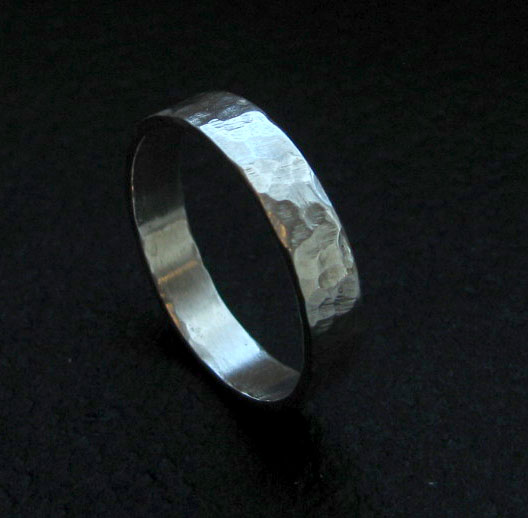 Any how, I thought I'd make an example for my students (again!) so they could learn how to solder a simple joint. The ring would be perfect practice for them. I decided to add a hammered texture to mine for a little more interest. 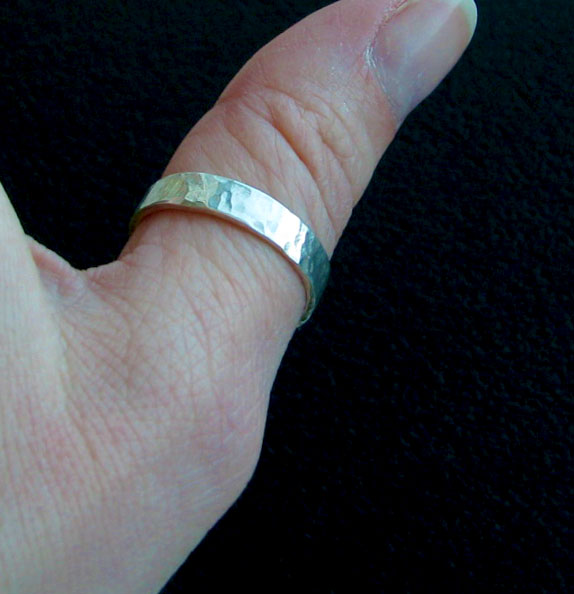 The photos were hard to get right. I'm definitely no photographer. Or hand model for that matter, ugh! I wanted to show the texture of the ring close up but it's been so cloudy here the lighting was difficult to get right. It's also been incredibly cold. This morning was -9 degrees F! And don't get me started on the wind chill factor.
Have a great weekend all!
Posted by Laura at 3:09 PM 20 comments: 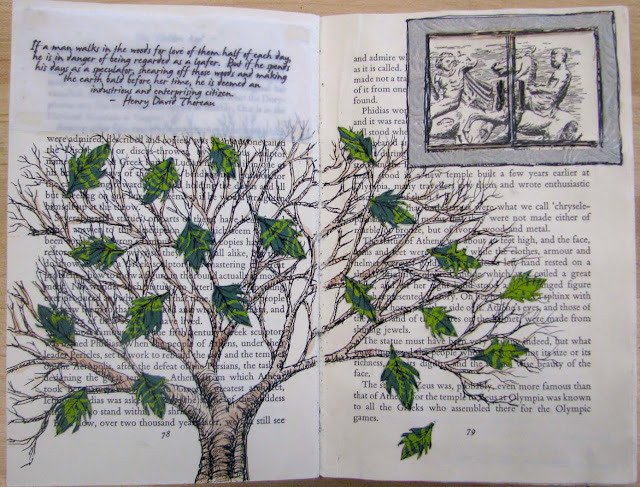 A couple of years ago I began an altered book as an example for a project my students were given. I've added to it slowly and I currently have four spreads finished. Well almost... 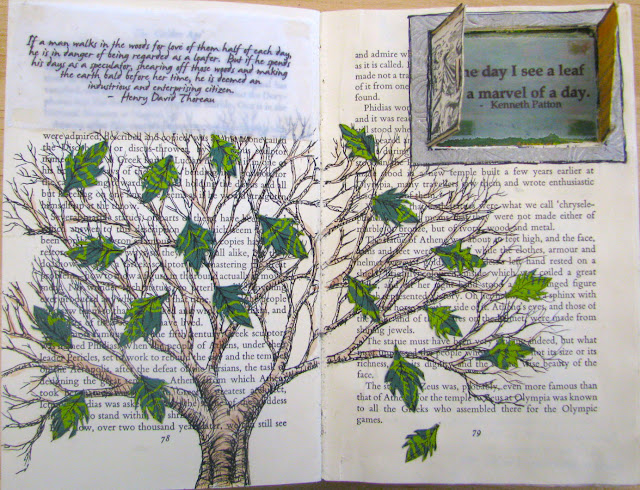 This spread has a "window" cut out to reveal an illustration a few pages down which you can see in the first photo. Then I cut that page to work like doors revealing a quote inside by Kenneth Patton. 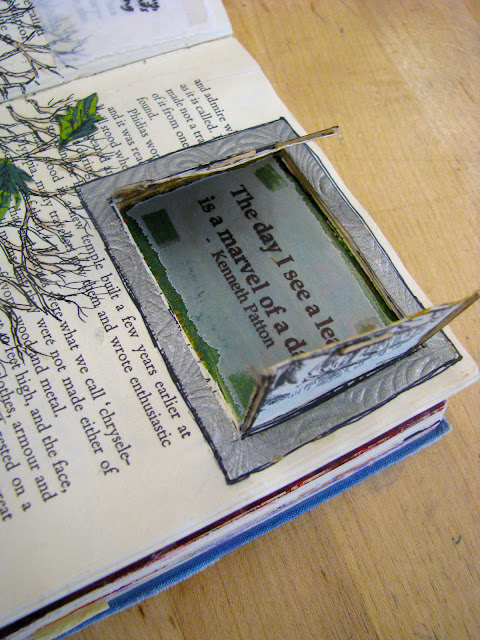 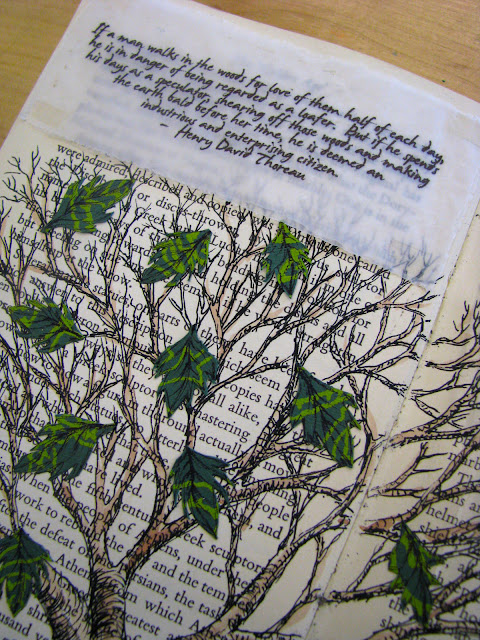 The passage on this page by Henry David Thoreau I thought was very relevant today even though it was written over 150 years ago. The tree was drawn in tech pen and then painted with watercolors. The leaves were cut from a patterned paper and attached. 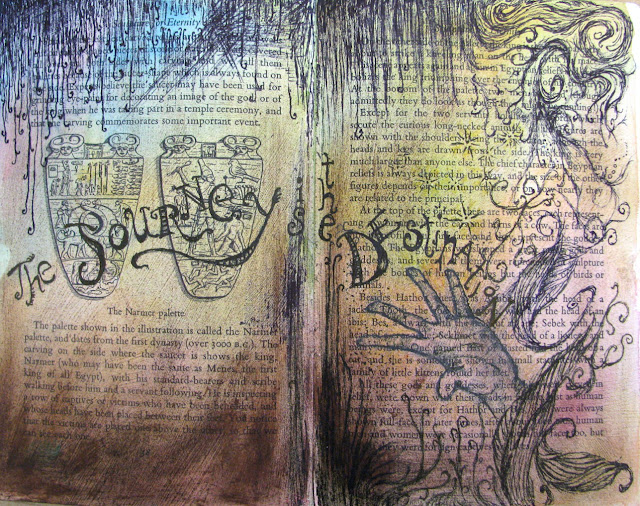 This spread was inspired by the story of Dan Eldon. This one is still incomplete and I'm really stuck on it. My original intention was to collage photos and ephemera on it ~a la Dan Eldon journal style~ but I began drawing on the page one day when I was summoned for jury duty and had to sit around waiting with nothing to do for a couple of hours. 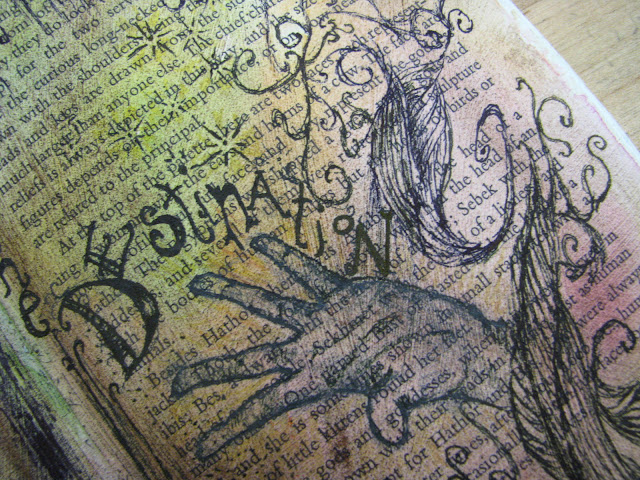 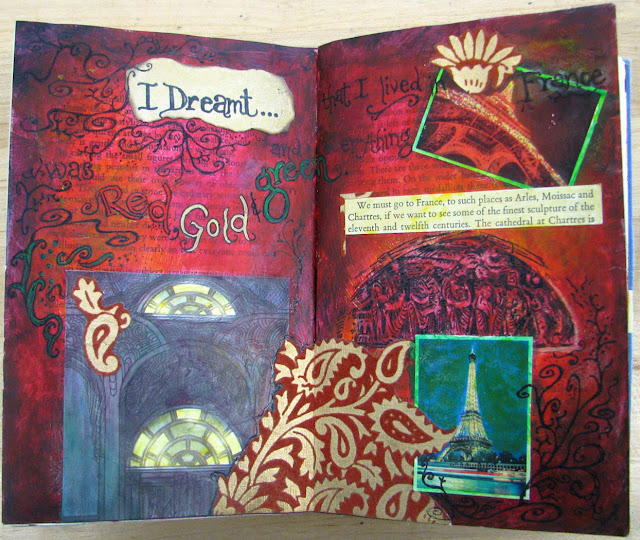 This was the first page I did in the book and while I like it, it was my first attempt at mixed media ever so it's not very unified. It's hard to read but it says "I dreamt that I lived in France and everything was red, gold and green. I had images of the movie Amelie in my head while I was creating this page. 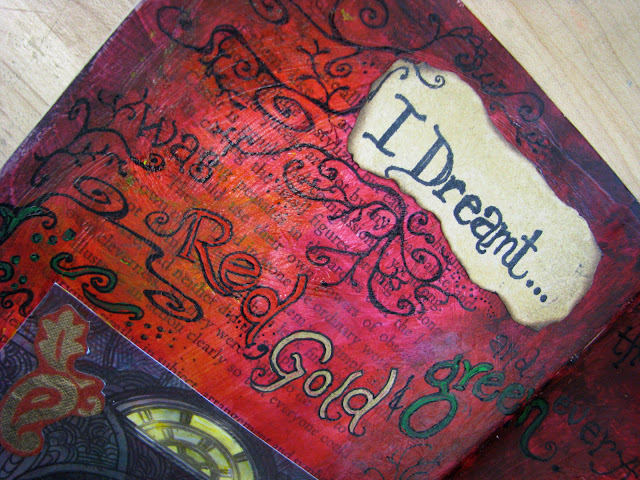 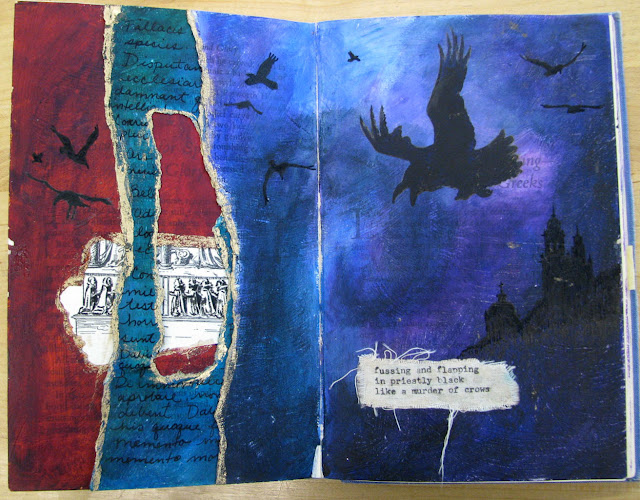 This last spread is probably one of my favorites. Maybe because there's birds on it! Never realized how much I use them in my art! The theme for this one was inspired by the passage typed on the muslin fabric. It's from a song by Sting which seems very kitsch I know. But I've always thought that crows and ravens make great subjects because they seem to add an air of mystery and have a dark quality to them that other birds don't portray. The pseudo religious sentiments in the song lyrics contrasting with the imagery of a "murder of crows" appealed to me at the time as a great visual juxtaposition. 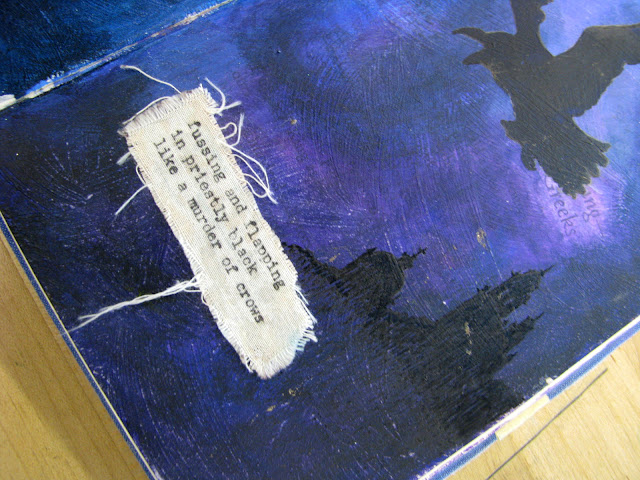 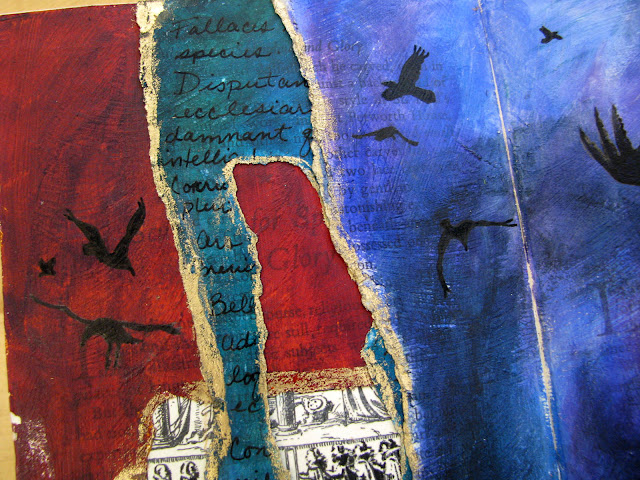 The green page in the middle has latin phrases written on it but I did it so long ago I can't remember what they were about. The cut out area in the center reveals an illustration in the book of a sculptural frieze in a gothic cathedral of the birth of Christ. I also put gold leaf on the torn edges. 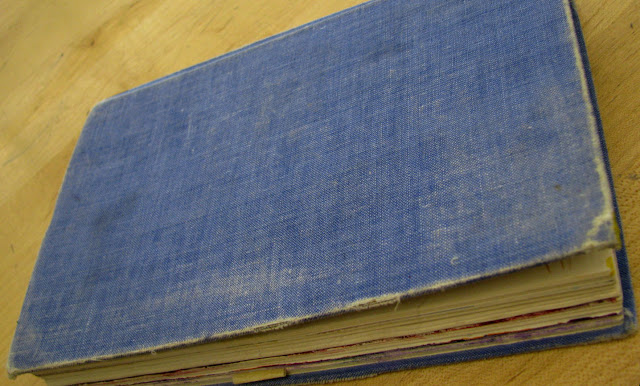 ﻿And here is the unassuming cover. I don't know if I will decorate it. I like the fact that it looks so simple and yet it holds something completely unexpected inside.
Posted by Laura at 2:07 PM 5 comments:

﻿Well I couldn't wait any longer! After perusing some of my favorite blogs and being so inspired over the holidays I finished a mixed media piece. Oh definitely feel better! Very satisfying after such a long break.

I had intended to post some sneak peeks of it yesterday but somewhere between work and home the photos I uploaded didn't show up on my computer. So I decided I better just finish it now!
I took the last two photos below and then decided I really wanted to paint the bird. He just seemed incomplete still and I think I made the right choice to paint him. What do you think? 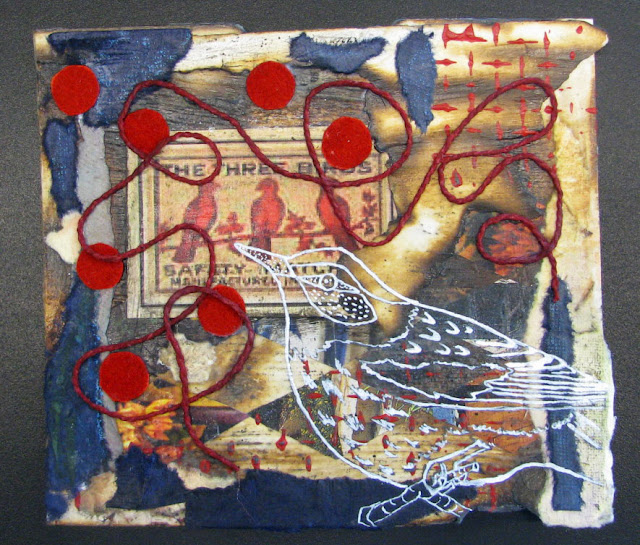 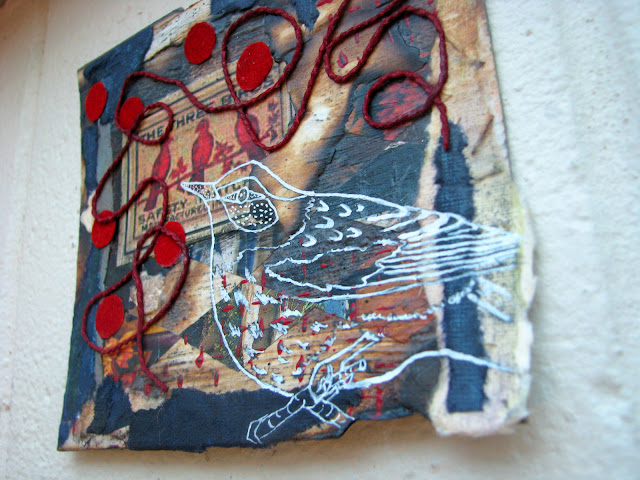 I began by using a piece of illustration board that I had layered with glue and then burned with a torch. I found some photos on a website with ephemera and I really liked the ones of old matchbox covers. I never realized how pretty matchboxes were. Then I started layering on diamond shaped pieces of magazines and torn paper with matte medium. I drew the bird in white acrylic ink and cut out some fuzzy circles and a piece of string to add to the composition. I also had an old piece of screen that I coated with paint and pressed onto the board for a pattern. I really just wanted to paint that bird too but I still wanted to see the layers underneath so I made sure the paint was translucent.
Overall I am pretty pleased with it! I wish I could do that all day long!
Posted by Laura at 4:50 PM 7 comments: 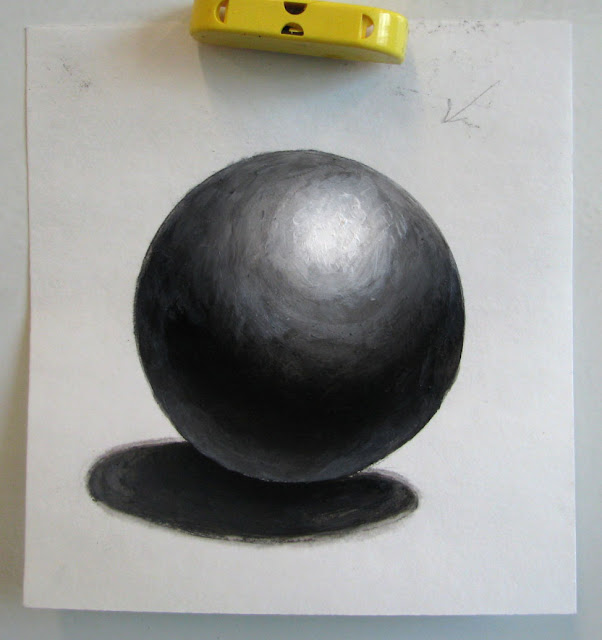 Well it certainly has been a long time since I posted anything﻿. Since the chaos of the holidays I have been busy with work finishing the end of the semester and crazy preparing for a new semester with new students and new classes. This one pitiful sphere (an example for my students) is the only artwork I have made in weeks! Needless to say I am going a little stir crazy. But I am knitting again in the evenings so that has definitely helped. I should be done with another baby hat soon.
I have plans of making an art space (not really a studio) in my house so I can have a place to create artwork at home that isn't smack in the middle of the kitchen! And as this new year opens I have been tossing around the idea of selling my artwork online with my husband. We, of course, need to make things to sell first, so we are easing in to this idea and not stressing about it. Because who needs more stress? Although I have to say that I find the prospect of creating an online store to sell our artwork a very attractive idea. Something new and completely different for both of us. We'll see...
Posted by Laura at 2:38 PM 3 comments:

A friend of mine just got her new blog up and running. She is an amazing photographer! She has such an eye for finding beautiful compositions and places to use as settings for photos. I am setting up a session with her soon. Take a look at her new blog!
Posted by Laura at 5:47 PM No comments:

Laura
I am a high school art teacher looking to share more of my own art work. Finding the time to do it has always been a struggle and I'm hoping this blog will keep me on my toes.